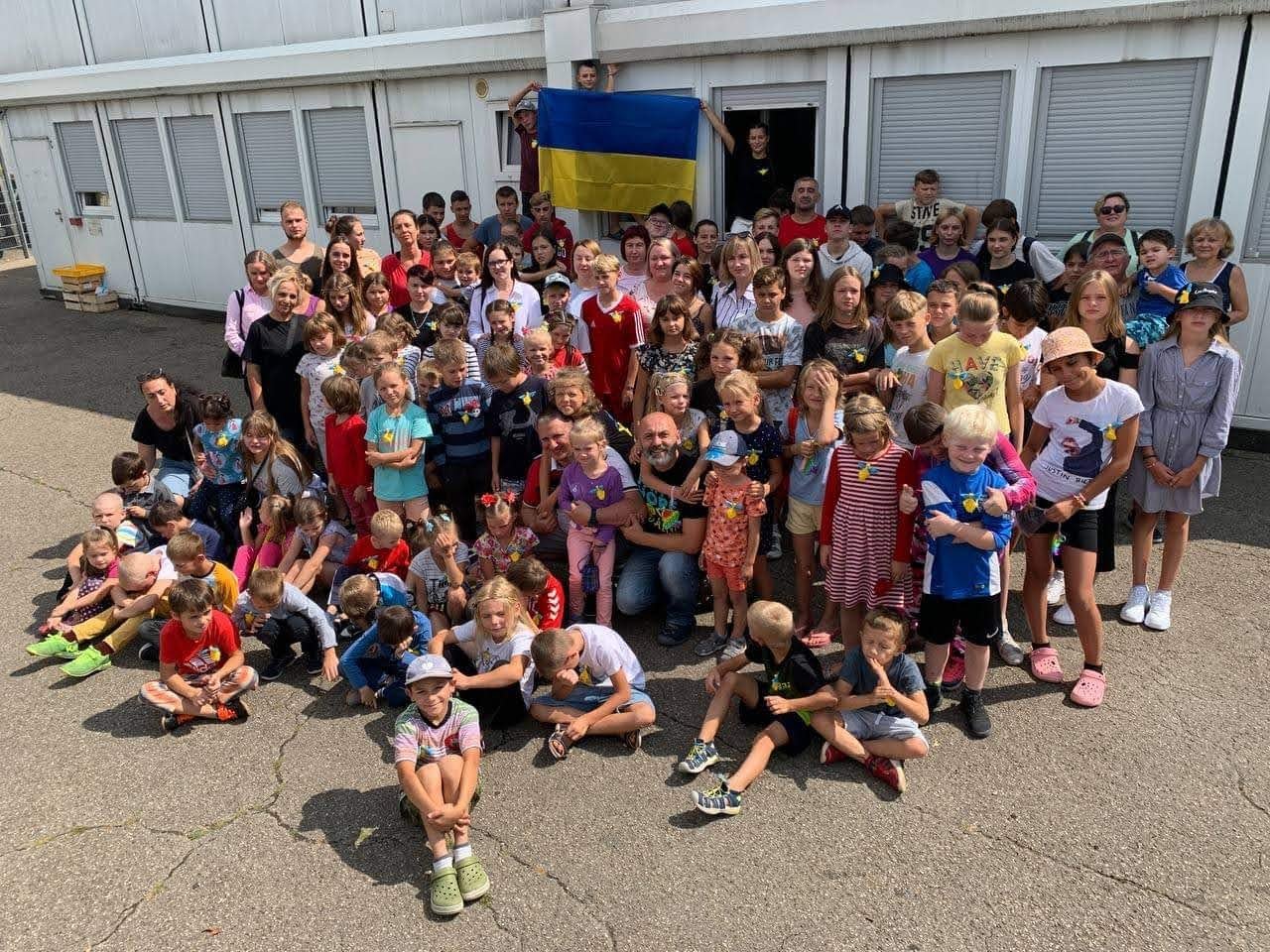 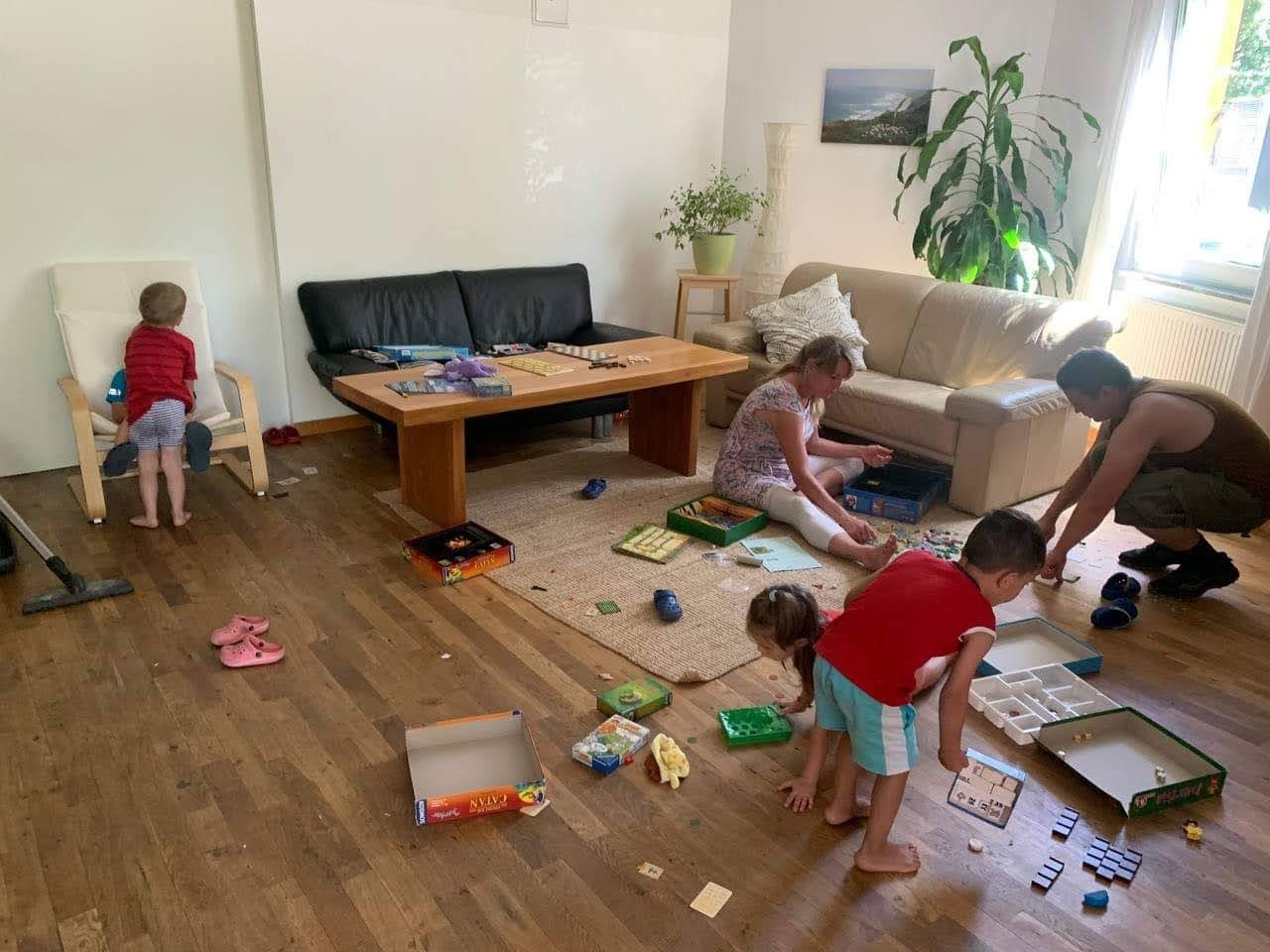 Hi everyone – at last, steps forward to report! Our daughter, Sarah, and her family were just with Father’s House in Freiburg for a few days  and spent a lot of time with children and also with Roma and family so I have first-hand news too.  Below is a link with photos.

Last night was very exciting going to the airport in San Diego to meet two FH girls who will be attending English language school here and be a part of a lovely family from our church. Sarah sponsored them and was at the US embassy interview in Frankfurt. Months of paperwork and a ‘long shot’ so it was amazing to get not only a ‘yes’ but be issued three year visas. The photo of Yulia and Victoria, aged 17 and 16,  was taken at a  California style cafe when their visas were approved!

Wonderful news is 40 of the younger children plus caregivers are now in new accommodation with bright bedrooms, bathrooms and kitchens, and comfortable beds (2 photos in the link). The children are so happy in their new home and finally out of the refugee camp metal containers.  Their first dinner in their new home of course had to be borscht to celebrate!

One of the two non profits in Freiburg helping FH, City Mission, owns a spacious building they have been using as a guest house.  They are giving this building for FH accommodation.  Renovations are underway to divide it into 4 separate living areas each with own kitchen, etc  so that 4 FH family groups can live there.  It is hoped the move to this new accommodation will be made later this month.  And there is a plan for another place too, hopefully for moving into in October. City Mission, and the other non profit, Seinlaedele, are incredibly dedicated to doing all they can to help FH.

A private organization called Weise is contracted by the German government for projects to do with children and youth and they are working with City Mission to get caregivers for FH so that there will be a ratio of two caregivers to every ten children. Roma is part of the interview process for new workers. Lack of staff has been a huge issue and exhausted workers.

Another area of stress has been alleviated – there had been pressure on Roma to sign German documents that would have really restricted FH long term options. Finally, it has been agreed that Roma has a grace period of two years. And if at the end of this time FH has not been able to return to Ukraine, then Roma will sign the documents.

Education is a complicated situation.  School starts tomorrow.  The German government say the children must go to German schools. The children have been attending German classes but for so many kids this is going to be a huge challenge trying to learn subjects in German. And then there is the Ukrainian government saying the children must follow the Ukrainian education system, which is very rigid about what children need to cover in each subject in each week.  Some of the teachers who taught the FH children are still in Kiev and they will teach the children online. The man who was the Principal of the FH school in Kiev has just been to see them in Freiburg to work on how to best do this. At the moment, the plan is German school during the day followed by Ukrainian school after they get home, which is going to be extremely difficult for children to try to handle. It is hoped that as the German school teachers see children having difficulties learning in German, let alone many with learning issues in the first place, that decisions will be made that will make it easier for the children.

A  9 seater van was purchased for FH – transportation has been a big issue with old, unreliable vehicles. The photo shows Roma and Hans Peter from Seinlaedele with the new vehicle. It was a complete surprise for Roma. There is a funny story around the purchase of the van – it had only done 30,000 kms but was purchased for an extremely good price because the previous owner on entering a parking building misjudged how high the van was and did extensive damage to its roof.  After purchasing, the roof was repaired, but it still was a great deal!

There is a purchase for an 18 seater van in the works too. With FH being spread further apart with new housing, there will be a big need for  transportation. These purchased vehicles will go with FH when eventually they are able to return to Ukraine.

You will see a photo of a large group outside a circus tent. This is of the 162 FH ‘family’ still in Freiburg who got free tickets to a circus. And there is a photo of a FH group at one of the refugee camps.

‘Kids Camp of America’ has an organization they set up in Germany and they put on a day camp for a week to give the children end of summer fun before school starts (see photo).

The photo of the smaller group is of our daughter, Sarah, and her family on an outing to the Monkey Park for children who were particularly well behaved and helpful the last few weeks.

Sarah wrote, I could see in my time with Father’s House in Freiburg that meeting a child’s emotional, physical, and spiritual needs remains at the heart of all that FH does. It isn’t easy as each worker navigates through their own experience as refugees. In my time in Germany, I was so moved and humbled seeing in person the level of self-sacrifice each worker who stayed with them has made to remain with the children and live with them.  They are pouring out their lives and need a lot of pray and encouragement in their own personal journey.’

The Ukrainian government asked if FH would take 36 war orphans who have been in hospital and nowhere to go, or are homeless and no parent found to care for them. The first of these children have arrived. Before the war started, FH was doing a major renovation to the front original building because of new fire safety standards they were forced to implement. The work didn’t get finished after war broke out and they are just starting working again to complete so that the orphaned children can live there. It is wonderful that FH in Kiev is continuing to be a refuge for children.  Also, there are some families living in the FH back building whose homes were destroyed.

The ‘Dad’ of one of the FH family groups in Freiburg has a nephew who serves in the Ukrainian army. Their troop had 4 vehicles assigned to them, 3 of which got destroyed and the one remaining one  in poor shape and full of bullet holes.  Ezra and Ambassadors of FH went 50/50 to purchase a vehicle for them, which will be used to transport food and medical supplies to the frontline.  Also to transport nurses,  and to bring soldiers back from the frontline.

Roma and Father’s House are so very grateful for the love, prayers, and financial support that have been helping them transition into a whole new life in Germany for whatever length of time they will be there.